A step beyond the fitness landscape model

We recently released an updated version of our preprint, “Fitness seascapes are necessary for realistic modeling of the evolutionary response to drug therapy”. This is my first first-author paper and represents the first of my dissertation work to be published. Here, I will describe the motivation of this work and some of our findings.

Disease populations within a patient, such as tumors or infectious, never experience a constant environment during treatment—the drug concentration within a patient rises and falls due to pharmacokinetic effects and diffusion within tissue generates a concentration gradient. In light of this, an important question to consider in evolutionary medicine is how we can predict the evolution of drug resistance when the selection pressure varies in time and space. To address this question, we explored fitness seascapes, which we model as collection of genotype-specific drug dose-response curves. In contrast to the fitness landscape model, where evolution is described as a hill-climbing process approaching the top of a fitness peak, peaks in fitness seascapes rise and fall as a function of drug concentration, analogous to the rising and falling of waves in an ocean.

We measured a fitness seascape in a genetically engineered E. coli carrying a combinatorially complete subset of resistance-conferring mutations in the beta-lactamase genes (4 point mutations, 16 genotypes in total). We measured the dose response curve for each genotype subject to cefotaxime, a beta-lactam antibiotic. We found evidence for fitness trade-offs, or evolutionary costs to resistance—a higher number of mutations was associated with a higher level of resistance, but at the cost of a lower drug-free growth rate. Mutants seemed to “trade” drug-free growth rate in exchange for drug resistance.

The complete fitness seascape is here, with fitness landscapes shown as cross section of the seascape at a given drug concentration: 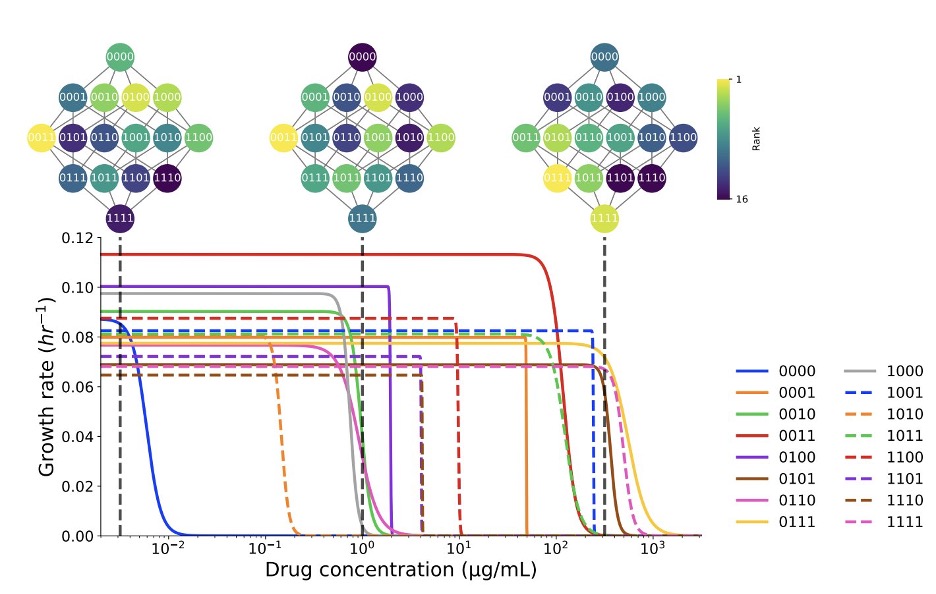 Fitness trade-offs cause the evolutionary landscape to change as a function of drug concentration, highlighting the importance of considering not just a binary fitness metric—i.e., drug susceptible or resistant—but the full adaptive fitness seascape. 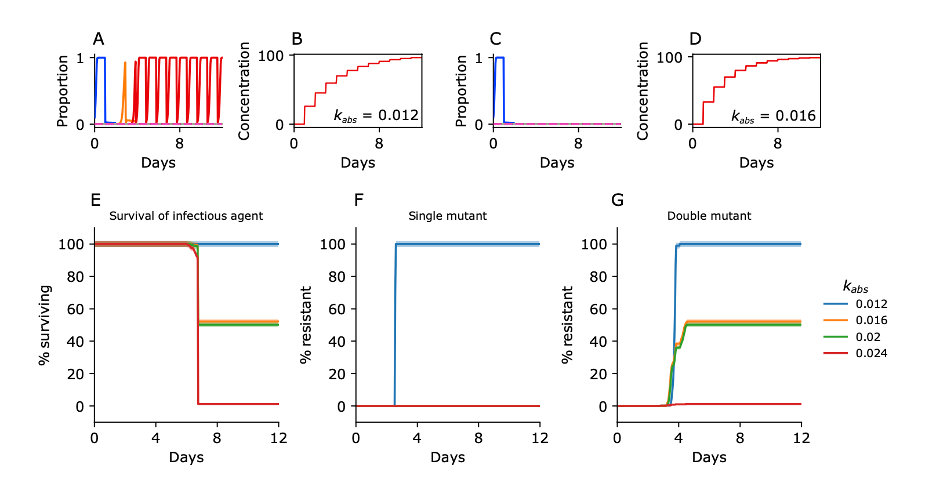 Then, we simulated patients undergoing a daily drug regimen to treat an infection with varying rates of nonadherence. Briefly, simulated patients had a constant rate of “forgetting” to take each individual drug dose, and a unique drug dosing schedule and resulting drug concentration curve was generated for each patient. As expected, we found that higher rates of nonadherence were associated with higher rates of drug resistance. 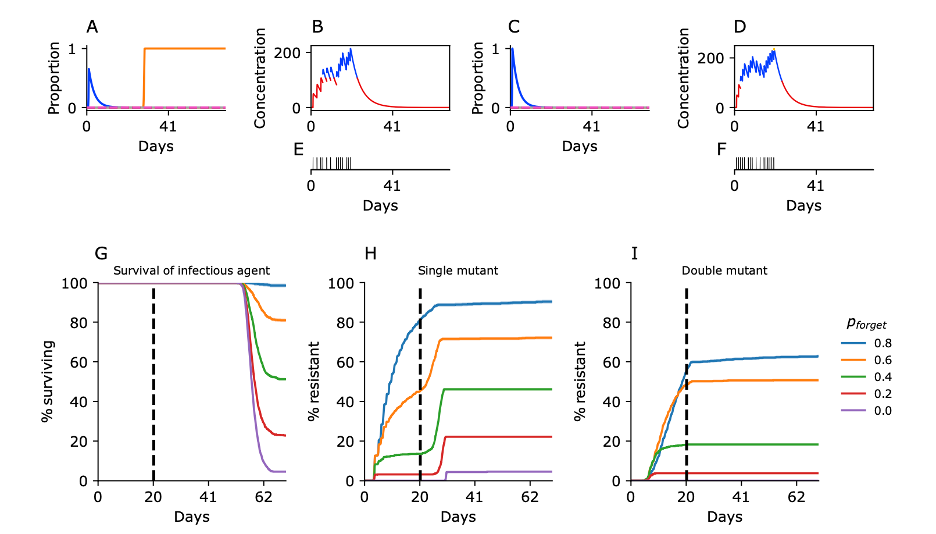 After digging into our simulated patient nonadherence experiment, we found some interesting findings. Early regimen adherence was found to be critical for successfully eliminating the infection (y-axis here is roughly the importance of each dose):

In addition, we found that the time between the first two administered doses is highly correlated with treatment success. Almost every simulated patient that successfully eliminated their infection had 1 day between their first two doses. We think that this illustrates a two-strike model of disease extinction: the first strike drives a susceptible population to a small size, reducing diversity, while the second strike exploits the vulnerability of small populations (adapted from Gatenby et al, 2020).

We believe that considering fitness trade-offs is important for modeling the emergence of drug resistance within a patient. The fitness seascape model presented here is a relatively facile and scalable platform for predicting evolution when the selection pressure varies in time and space.