Modeling the effects of EMT-immune dynamics

Modeling the effects of EMT-immune dynamics on carcinoma disease progression

Read the paper
This paper started with the simple observation that two important processes in tumor biology both involved a single protein. Transforming growth factor beta (TGF-β) regulates the immune system1 and drives the epithelial-to-mesenchymal transition (EMT)2. Recent work3 showed that mesenchymal cells interacted differently with the immune system than their epithelial counterparts, adding a layer onto these interactions. When the decreased proliferation4 potential of mesenchymal cells is also accounted for, a natural tension is created between the benefits to the tumor of more evasive mesenchymal cells and more proliferative epithelial cells. We wanted to understand these tradeoffs and see if we could identify potential ways to exploit them for therapeutic purposes. To explore the tension in this system, we turned to agent-based modeling. In this framework, we could use simple rules to explore the complex behavior of cancers during progression. Each tumor cell is an agent, existing in one of a number of states based on which mutations the cell has acquired and its location on an EMT spectrum. As the tumor cells proliferate, their DNA becomes more damaged and they can gain new driver mutations. Also, as the simulation goes on and TGFB ebbs and flows in the tumor microenvironment (TME), tumor cells stochastically move along the EMT spectrum with a cutoff separating epithelial and mesenchymal tumor cells. 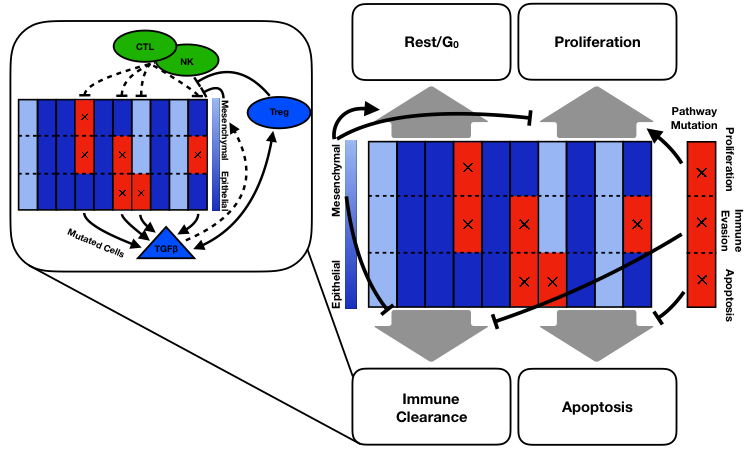 Figure 1: Model Cartoon. Each column represents a tumor cell and each row corresponds to a possible pathway mutation. The shade of blue indicates whether the cell is labeled epithelial or mesenchymal. Red with an x indicates a pathway mutation. Inset shows effects of immune compartment on tumor cells. Dashed arrows indicate stochastic effects.

Interacting with the tumor cells are immune cells consisting of three cell types: natural killer cells (NKs), cytotoxic T cells (CTLs), and T regulatory cells (Tregs). As we did not consider the role of heterogeneity within each of these cell types, these are modeled as continuous variables, i.e. not agents. CTLs and Tregs are recruited to the TME as tumor cells die. NKs and CTLs clear tumor cells while Tregs stymie them and also release TGFB. Seeking to understand how the mesenchymal phenotype affects progression, we saw that an intermediate level of mesenchymal proliferation maximized the time to progression, i.e. was a best case scenario for the patient. Now, high levels of mesenchymal proliferation would clearly be bad for our in silico patients as then they are basically epithelial cells with immune evasiveness. So what was surprising is that it is worse for the patient to have non-proliferative mesenchymal cells rather than slow-cycling mesenchymal cells. 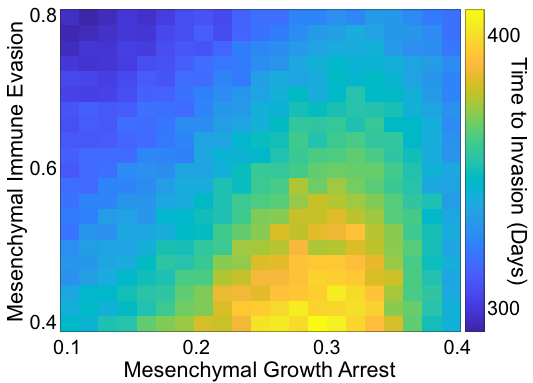 Figure 2: Summary of the effects of mesenchymal parameters on invasion-free survival.

To test this prediction in the model, we employed a Bayesian data analysis framework using gene expression data from TCGA. We found that mesenchymal-associated genes predicted differences between high and low disease-free intervals (DFIs). Many of these genes have known effects on tumor progression, such as both canonical and non-canonical Wnt signaling5. We also discovered new interactions between fibroblast growth factor (FGF) signaling and other transcription factors, the co-regulation of which could affect clinical outcomes, which could be exploited by novel therapeutic strategies. 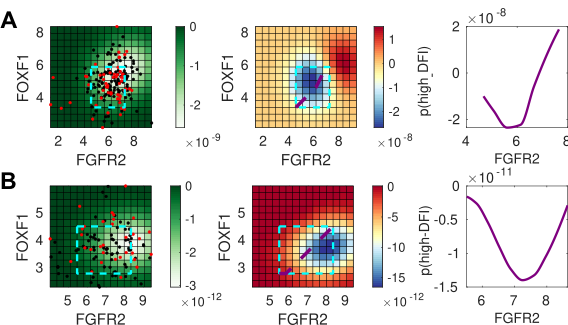 Within this hybrid multiscale evolutionary ABM framework, we are able predict new mechanisms by which these tumors can be targeted. We also qualified how tumor heterogeneity benefits the tumor, showing yet again that the complexities of tumor biology are necessary to consider in order to optimize treatment.