The context-dependent cost of high ploidy

Tipping cancer cells over the edge: the context-dependent cost of high ploidy

Read the paper
Cell populations with more DNA are often observed further apart from euploid states1,2. High ploidy serves as a buffer against deleterious effects of genetic alterations, facilitating tolerance of SCNAs1,2, but it is energetically costly. Our perspective on the context-dependent fitness cost of high ploidy offers the hypothesis that differences in resource availability for dNTP synthesis in the tissue micro-environment are important factors limiting the evolution of high-ploidy cells3. 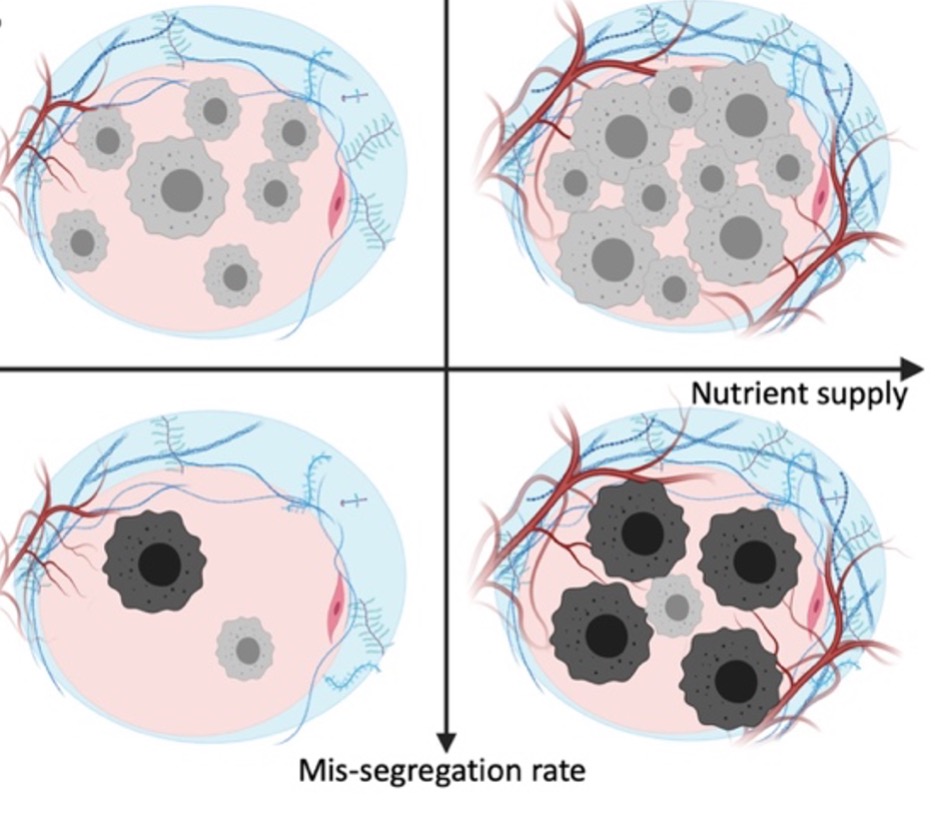 Raw materials needed to generate deoxynucleotides, the building blocks of DNA, are candidate rate-limiting factors for the evolution of high-ploidy cancer cells. Specifically, we discuss Oxygen, Phosphate and Glucose as limiting substrates of dNTP synthesis in gastric and brain cancers: 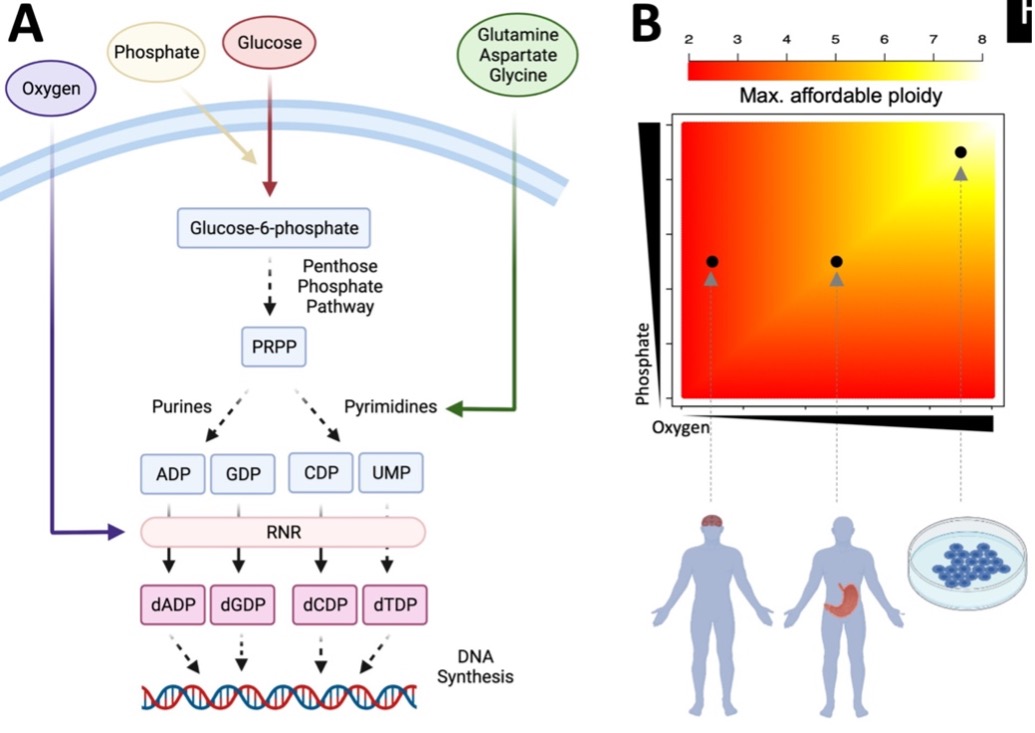 For example, Oxygen levels lie at the intersection of several phenomena that are unique to Glioblastoma (GBM) – an aggressive type of brain cancer. Stark gender differences in GBM pathology correlate with the sexual dimorphism in physiologic oxygen perfusion levels in the brain4,5. Pseudopalisading necrosis in GMB co-occurs near steep oxygen gradients6. Although oxygen saturation does not fall below 4% in most tissue types, in brain tissue oxygen levels often go down to 0.5%7. These studies support the idea that triploid and tetraploid states can often be a disadvantage in the brain, as they demand dNTP synthesis rates that cancer cells cannot sustain due to inherent low abundance of O2 in brain tissue. Without the capacity to sustain double the amount of DNA, these tumors are limited in their evolvability and may be trapped at local fitness optima. While we focused on gastro-intestinal and brain environments, the hypothesis could also apply to several other cancer types and may explain the variable ploidy levels seen across different primary and metastatic sites:

If this hypothesis is true, the implications are broad. It would explain vast differences in the extent of inter-tumor karyotype heterogeneity. For example, the vast majority of GBM fall into a single, well-defined karyotype defined by chromosome 7 amplification and chromosome 10 deletion, whereas gastric cancers have highly variable karyotypes. It may contribute to explain why agents that block dNTP production8 work well in combination with DNA damaging agents -- because they complement each other in targeting high- and low-ploidy cells that co-exist in a tumor. If a tetraploid subclone expands, it consistently does so early in tumor evolution9,10, when cell density is still low and competition for nutrients is comparatively weak, suggesting these conditions favor the growth of tetraploid cells. We recently developed a mathematical model of co-evolving high and low ploidy cells11,12, accounting for the increased resource demands of high-ploidy cells. Models such as this could be used to evaluate competition between low and high ploidy cells during early stages of tumor evolution. Understanding the resource cost of high ploidy can help uncover its therapeutic vulnerabilities across tissue sites with versatile energy supplies.