Read the paper
Many investigations in mathematical oncology have demonstrated the critical role of chemotherapeutic treatment schedules in clinical outcomes. While early schedules relied on administration of a maximum tolerated dose, subsequent studies of low-dose metronomic schedules sought to achieve tumor control while slowing the emergence of acquired chemoresistance1-3. Newer progress in adaptive therapies has emphasized the role of evolutionary steering and the potential to manage resistance by responding to the specific dynamics of individual tumors4-6. A broad challenge of schedule design has been the real-time determination of the relative frequencies of sensitive and resistant evolving cell phenotypes in a particular tumor population. Monitoring heterogeneous cell states is a challenge in the clinic and even remains challenging in simplified in vitro settings. Here we developed a methodology to systematically investigate in-vitro drug schedules and quantified the results using mathematical modeling7. This was accomplished through high-throughput longitudinal monitoring of 3 breast cancer cell lines, each treated with 9 doses of doxorubicin in 13 different treatment regimens (n=12 replicates each, cell images collected every 4 h for up to 800 h after treatment) (Figure 1). Beginning with a biexponential model, we sought to describe the death of sensitive cells and time to re-growth of resistant cells, while considering that both cell populations exhibit significant inter-population variation in drug response dynamics. 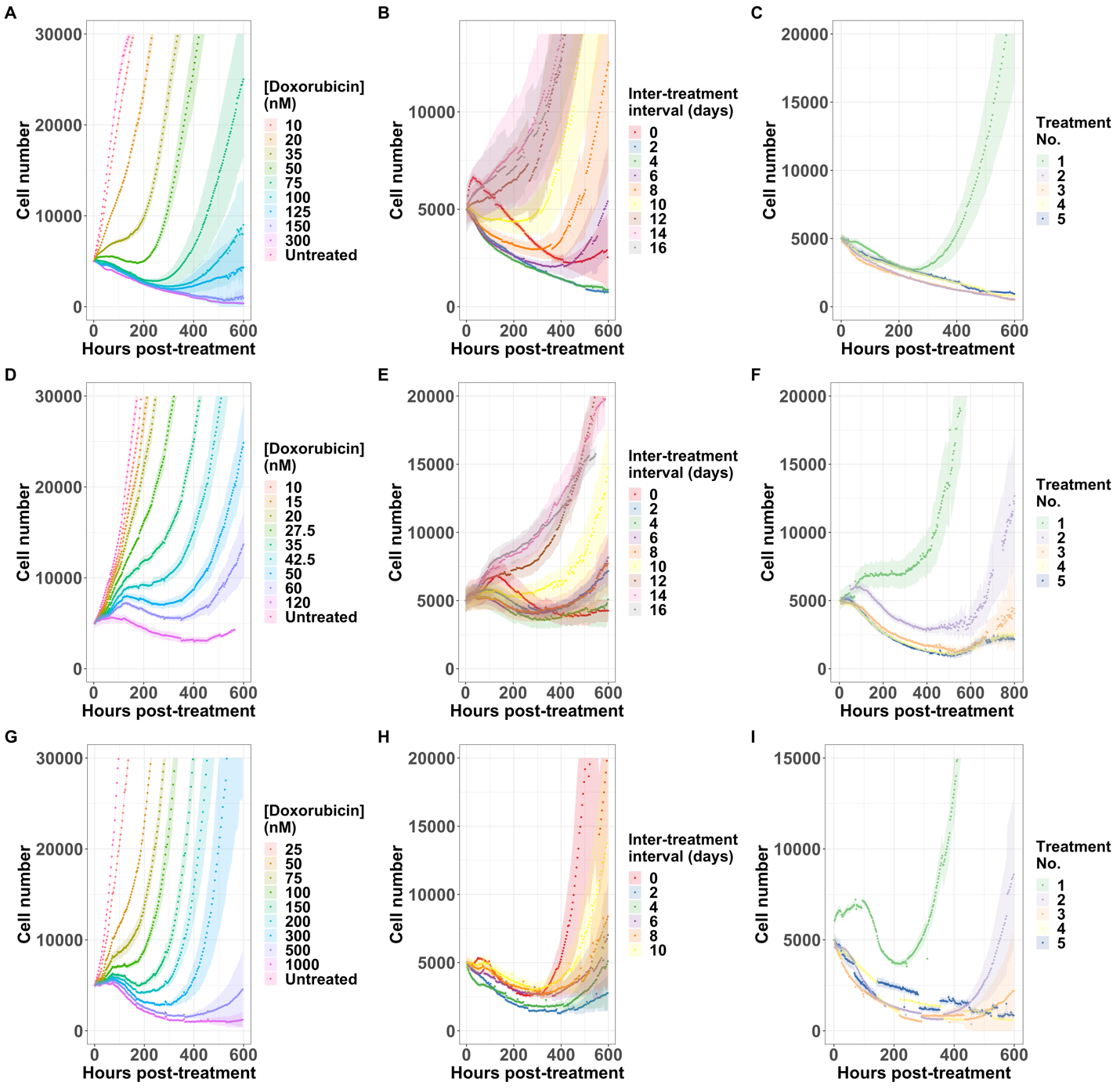 Figure 1: Cell growth over time in response to varying doxorubicin regimens. The first row is the response of the MCF7 cell line, the second is the response of the BT474 cell line, and the third is the MDA-MB-231 cell line. The first column varies the concentration of drug, the second the inter-treatment interval, and the third the consecutive number of treatments. Each curve is the average of six (A,D, G) or 12 (B, C, E, F, H, I) replicates.

To better interpret cell proliferation and death data, we evaluated a family of phenomenological models that were fit to the data. In the model selection process, we determined that two modifications to a biexponential model were necessary to fit the model to ground-truth data. First, we observed that sensitive cells may remain quiescent for days to weeks after drug treatment before eventually dying. Models with an exponential delay in death rate of sensitive cells best described this observation. Second, we noted a delay in the proliferation of resistant cells after doxorubicin washout. In model identifiability studies, we found that the resistant cell growth delay and the resistant cell fraction are not computationally separable, therefore this delay must be determined experimentally for each set of cells and treatment conditions. To measure the proliferation delay, we developed a computational pipeline which used density-based clustering to identify the time at which patches of cells begin to regrow after treatment. With these additions to the model, we found that the inter-treatment interval, or the time between treatments, was an optimizable factor (Figure 2). For example, MCF7 cells treated with 2 doses of 75 nM doxorubicin separated by an interval of 2 days showed significantly longer time to re-growth than cells treated at intervals of 4 or 10 days, and significantly longer than a single dose of 150 nM doxorubicin. Furthermore, under some treatment regimens, we observed a bifurcation in the cell population response: some replicate cultures recover proliferative capacity during the experiment, while others do not. In these cases, retreatment during the window of transient sensitivity increased elimination of the cancer cell population. 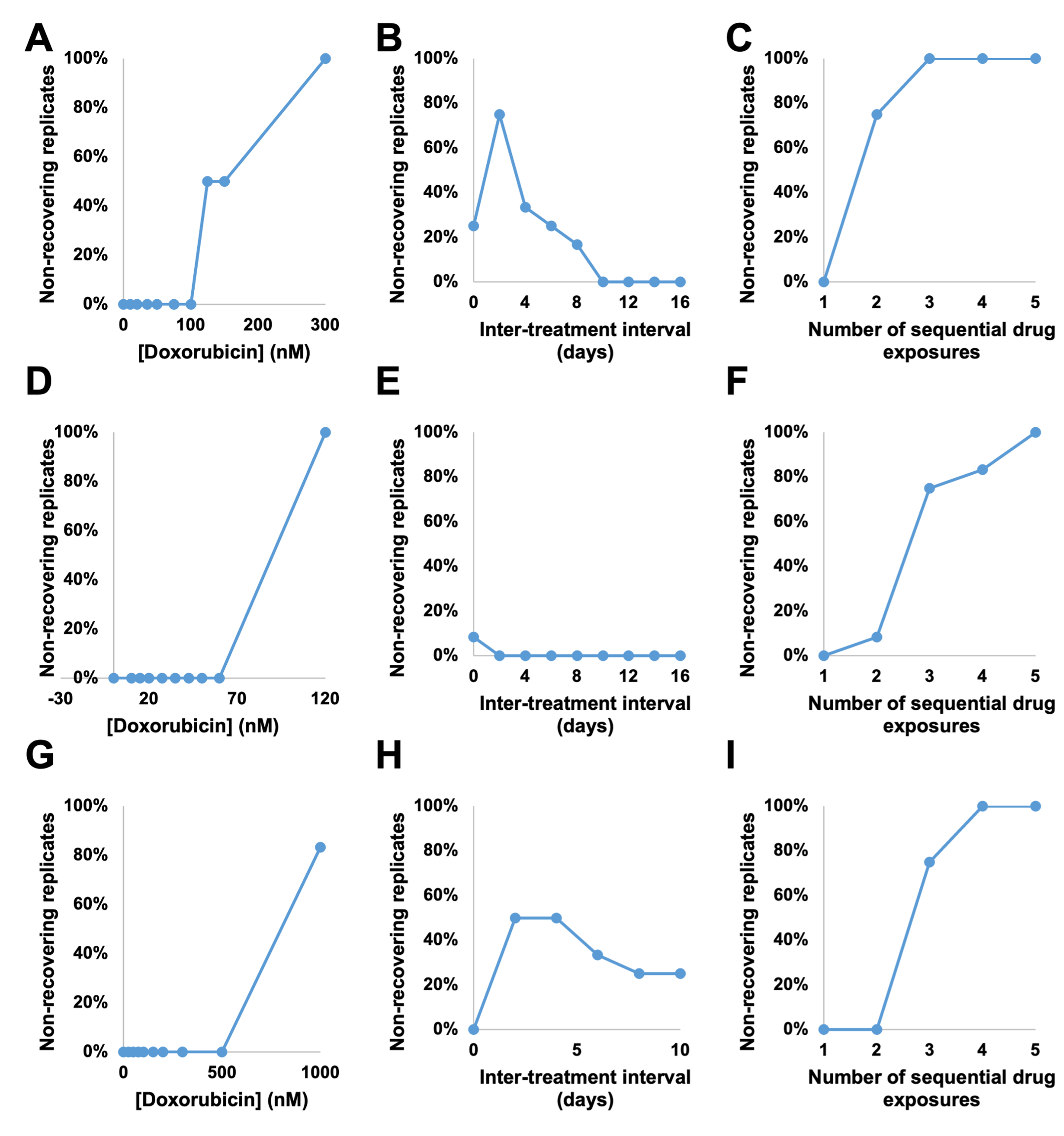 Taken together, these studies indicate that the processes of cell death, cell cycle arrest, and resistant cell proliferation after chemotherapy treatment are complex and their time scales may overlap. In vitro studies and preclinical screening often report cell death at a single end-point 24–72 hours after treatment; this is insufficient to quantify the long-term drug response of the heterogeneous cell population. Longitudinal studies such as this one, implemented iteratively to identify key time scales that include inter-treatment interval, may enable further optimization of drug treatment schedules to better inform preclinical testing.